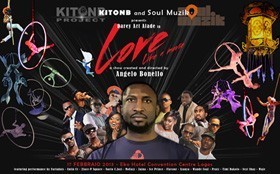 Love Like a Movie 2013 is the show-concert of the Nigerian pop star, Darey Art Alade.

The concert becomes a visual spectacle on many levels with live performances by international artists and local stars. In a scenographic setting that becomes a real theatrical machine, acrobatic dance choreography and performers alternate and are revitalised in a whirl of costumes and images. The visual mosaic is completed with imposing video mapping and 3D animations on the 50 metre triple-screen.

The various scenes of this show tell the story of a man (Darey) experiencing the various stages of love in his life. His fantasy embellishes the details, his memory reconstructs dreamlike moments creating a blend of reality, fantasy, words and music that passes from a heavenly world to an infernal scenario and ends in a triumphant finale.

The project of this show-concert arose from a rewarding dialogue between the musician Darey and the director Angelo Bonello, in which the dreams and passions of the pop star found completion in the stylistic approach of the Italian artist.