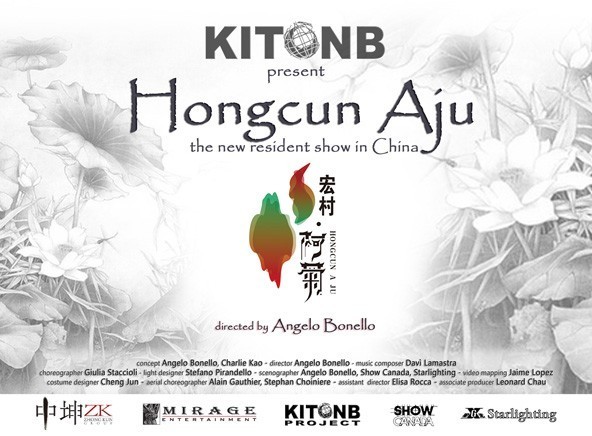 Hongcun Aju, is a resident show staged daily from March to October in Hongcun in China.

Hongcun Aju (literally, the girl from Hongcun country) was staged in 2012 at Qui Shu Lake, in the province of Anhui in the region of the Yellow Mountains, one of the most ancient tourist spots in China. It was commissioned by Mister Huang Nubo. The show is the essential component of an imposing project to upgrade the region’s tourism provision and enable the mass of tourists who otherwise would be in local hotel facilities every day to be occupied and entertained. The show was sold out for more than 3 months from the start (August, 2012) and is currently considered one of the must-see shows by the Chinese market.

Hongcun Aju is staged in a specially built theatre, with performances on water, land and in the air. The main stage is the reconstruction of a village with 90 metres of frontage, entirely usable for video projection, with a 150 metre wide swimming pool and an aerial space 50 metres high. It features large scenic machinery in motion (a flying lantern, a huge lotus flower and a ship). The curtain is a great cascade of water. In this scenario, the performances of the dancers, stuntmen and actors, guided by voices off and special lighting and water effects, follow one after another in a show of an hour and twenty minutes.

The show tells the story of Aju, the immortal heroine of Hongcun (a UNESCO World Heritage village and the set of blockbusters like “The Tiger and the Dragon”) who fought and defended the village with an army of only women peasants against an attack by bandits until final victory and the return of their husbands.

The show was devised by Charlie Kao with Angelo Bonello, who directed and coordinated a troupe of more than 300 people, including artists and designers from China, Italy, America and Canada.