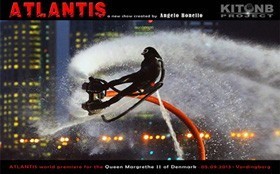 Atlantis is an aquatic theatre show.

Devised and staged for the first time in Vordingborg (Denmark) on September 5, 2013, commissioned by the local municipality to mark the occasion of the visit by Queen Margrethe II.

On a starry night, in the evocative canal that separates Vordingborg from Masnedø island, a parade was staged of 6 rowing boats with crews in traditional Danish costumes, leading a floating mobile scene depicting a hand on which a soprano sings a yearning air, composed for the occasion. Two sea creatures emerge from the waters and with their special hydro jets begin a duel with streams 10 metres into the air, creating evocative choreography, lit by a band of multicoloured lights. At the end of the battle, which sees the creatures swallowed up by the abyss, a flying machine suddenly appears in the sky with 4 winged female figures and a master jumper who ends the show by throwing himself into the air onto the audience. A pyrotechnic show synchronised with the original music ended the spectacular evening.

To pay homage to the Queen, it was decided to rely on 4 elements, starting from the land (and the men of a sailing people), then evoking sea creatures and flying figures, along with fireworks, recalling the lost civilisation of Atlantis.

The show was devised and directed by Angelo Bonello.